Making stuff out of other stuff: upcycling mens shirts

Taking my inspiration from the Cut-Up Couture book, I completed a couple projects over the weekend that took a few very ordinary mens shirts and transformed them into interesting clothes for me. 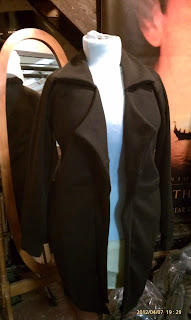 This long coat was made from two plain black sweat shirts that I got at Kmart, on clearance, for $2 each. It's really cuddly, too. The deviated quite a bit from the version that is described in the book. I kept the long sleeves, added the lapels, and did not include the patch pockets.


This top is made from two different mens shirts, also $2 each from Kmart, and it's a little more obvious how they went together. Once again, I used an idea from the book as inspiration, but added my own touches. I had to add the buttoned panel on the front to make it fit around the bosom, and I added the ruffles on the sleeves to make it look more girly.

Note: I draped the shirts onto my toile before cutting into them, because the measurements given in the book were definitely for a smaller person than I. I made adjustments accordingly.
Posted by Mirvana at 11:30 PM