A story about art, obsession, and crazy

I worked a 9-5 type of job in downtown Pittsburgh for several years, early 1990s until about 2007. As I was commuting to and from my work and walking the city streets, I noticed an unusual plaque that was embedded in the middle of the street. I saw it everyday, walked over it, and wondered what it was and what it meant, but didn't think about it too much until many years later, when I saw it again -  in St. Louis. Now it really had me thinking, so I snapped a photo of it and uploaded it to the interwebs for all to see. One of my internet acquaintances recognized it and gave it a name - Toynbee tile. Mystery solved, well sort of. I just stumbled on this documentary - Resurrect Dead - which searches for the identity of the mysterious "tiler," and they do narrow it down, but....no spoilers here. It was just a provocative story, and I feel in some small way like a firsthand witness to it.

There were hundreds of these Toynbee tiles in major cities all over the Northeast, and amazingly, in South America. However, many of them are paved over, and some have even been stolen - as in cut right out from the street - because they now have a perceived value as art. There is no effort to protect or preserve them. In Chicago, they were routinely removed like any other graffitti. So the tiles are disappearing and soon will be gone forever. There is a lesson in impermanence here. Otherwise, one might say that it was a brilliant PR campaign.

Addendum: Found the photos I took of the ones I saw in St. Louis, which aren't there anymore (I don't think). 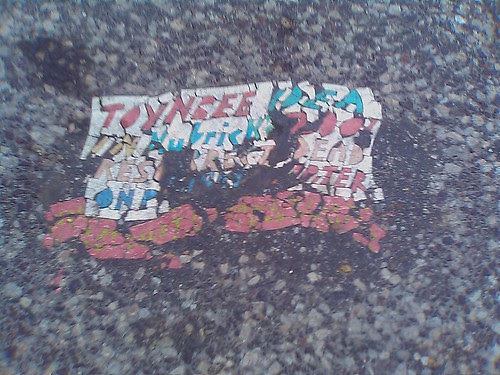 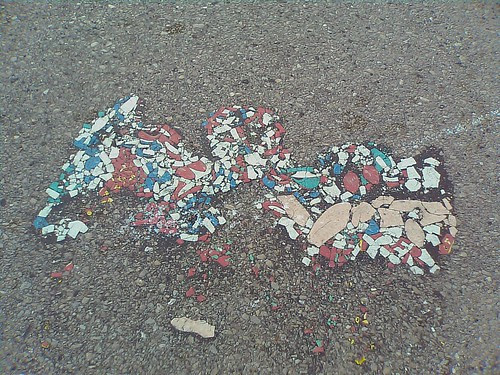