Yesterday, I attended the funeral of my great aunt Sarah, who was my mother's father's sister. I only met her once in 2008, but I grew up hearing stories about her, like the one time at Thanksgiving, when she shot a fox off the hen house from the kitchen window...that sort of thing - and she is one of my heroes. She was an amazing wonderful person, and I'm glad that I made the trip with my mom to Addison, PA, for the funeral. It got me thinking again about where I come from, who "my people" are, etc.

During that visit in 2008, Sarah got out the photo albums and documents, and told us about our ancestry. I captured my notes on it in this journal entry. That's important because, recently, my uncle (my mother's brother) had an ancestry DNA test done, and the results that he told to my mom were surprising because...

I grew up in a family that made much of it's Irish-German ancestry. When ever I asked the question, "what is our ethnic background?" the first answer was usually Irish, with German being a close second. That was probably because most of my relatives on my maternal grandfather's side called themselves "Pennsylvania Dutch" - a cultural group formed by early German-speaking immigrants to Pennsylvania. We definitely had the culture, in the form of traditional food and recipes that were passed down through my family. And, that branch of the family is Lutheran.

So imagine my surprise when... 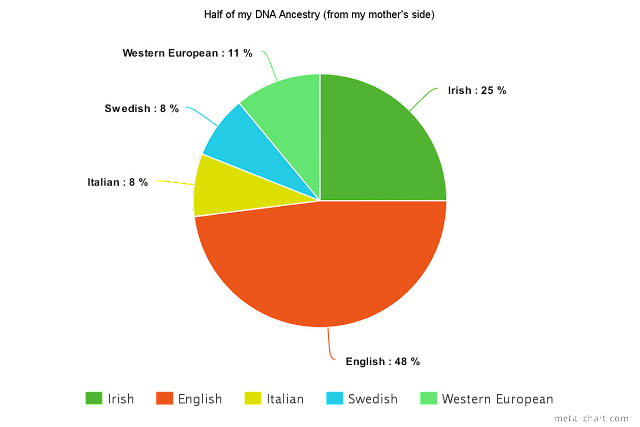 I don't see any German in there, specifically. Unless, it's tucked away in that Western European bit. The 25% Irish is no surprise. The large share of English is not that surprising, but I wasn't expecting it to be such a large part. Italian and Swedish? Where the heck did that come from?? Interesting.

Now, this is second-hand information. I should probably confirm it with my uncle. And, I'm curious enough to think about doing the test myself (or having my brother do it - to get the Y chromosome in there). My father's side is mostly Irish and English as far as I know, but who knows what kind of surprises might turn up?

Apparently, my Lakota ancestor is so far back in there and so isolated, that it doesn't show up at this level of granularity.

The Western European bit - probably comes from this: I'm a direct descendant of John Minear, 1730 - 1781 - from the Palatinate area of Germany.

Yes, I am curious now.