The Ides of March...

The weekend was very interesting and enjoyable. The weather was wonderful for the 'Burgh. Walked around without a jacket. You see, we don't have spring here. It goes from freezing, to balmy in an instant. Or, it just rains for days on end. Friday, I went to see Squonk Opera's new CD release party at the Rex Theatre--they rocked. If you've never seen them perform live, I highly recommend it. Their show is a multimedia feast for the senses, very entertaining, never a dull moment. The music is in a class by itself. It is probably most comparable to modern opera, but more comical and irreverent. If you like Rasputina, you might like this group.

Saturday was the performance at Schoolhouse Yoga. They had a nice turn out. besides khafif, there were a couple of other dance performances, including one Flamenco style group. 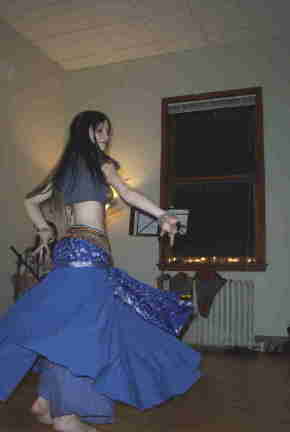 ...The only good picture I got.

I was a little disappointed that a real hafla did not follow. The crowd dispersed quickly after the show. See, you Beehivers could have come out to see us and you would have had plenty of time to make it to the Cauldron gig!!! However, Melissa and I did manage to talk the other Khafif-ers into going to Ceremony (goth night) afterwards. The theme of Dark Celtic/Pagan or songs with "green" in them held potential, but the DJs were not playing our requests, and most of the music was very mellow, slow, and not as danceable. We quickly became bored and left.

Yesterday, had a no-pressure low-stress Sunday for a change. Did not sew a darn thing. Went shopping, at a leisurely pace--no rushing. Watched "Children of Dune" on scifi channel. This first part was actually a very faithful telling of what happened in the book, "Dune Messiah" and was not too bad. I still find some of the costumes (like the benegesserits) laughable, and some of the acting lacking. In general, I liked the art direction in David Lynch's Dune much better than in this recent version. I am currently reading "The Butlerian Jihad" and it is ok.