What a Fourth! It rained and rained and rained. Good thing that I planned on NOT going out today. Spent most of the day in the workshop, and had some friends over for a cookout and movie night. We watched Lost in La Mancha--the story of Terry Gilliam's failed attempt at directing The Man of La Mancha. It's quite fascinating and touching. I like films about making films and this one really made me wish that I could see the finished product, but it was not meant to be. Okay, so it's a slow news day...here's something I've been saving up for such an occasion...Lately the city has erupted in a plague of dinosaurs. Here is my favorite one so far, on E. Carson St. on the South Side: 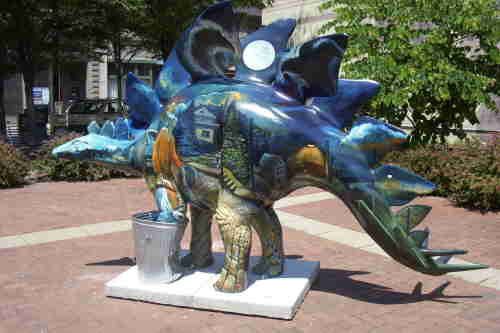 The photo doesn't do it justice...it is a clever city street scene of a garbage collector, early morning with a striking moon painted on one of the fins. The trash can is ingeniously incorporated into the piece.